Low carb cheesecake should be easy to make. The basic ingredients are mainly low carb. Eggs and cream cheese, and often sour cream, are low carb and are present in virtually all cheesecake recipes. The problem is the sugar found in the filling. Sugar is also in the traditional graham cracker or cookie crust. Our recipe substitutes “swerve” for the sugar and uses ground up almonds for the crust. Voilà – a delicious cheesecake without all the carbs!

For years, after I first began to cook in earnest, I would attempt to find the world’s best cheesecake recipe. I tried the traditional thick and creamy “New York” style. Attempts were made at pumpkin cheesecake, key lime, and strawberry versions. I used more sugar to try to make a cake like the many varieties found at “The Cheesecake Factory.” It actually became a quest! 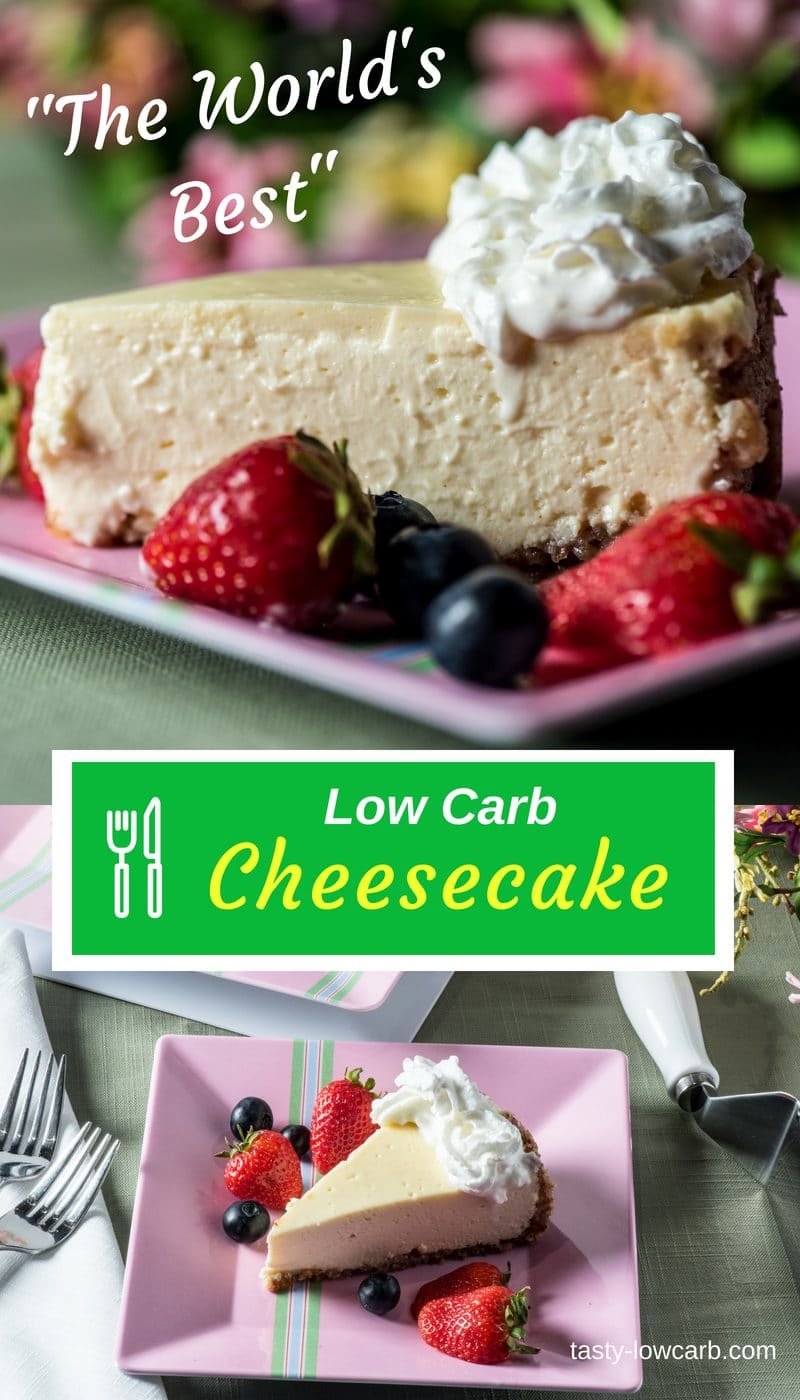 Then I met Joanie, the girl with the absolute world’s best cheesecake recipe! The rest was, as we say, “history.” Her famous cheesecake became a staple for our Christmas celebrations and many other holiday dinners. No matter how much holiday food was consumed by our family, there was always room for a piece of Joanie’s cheesecake for dessert.

Knowing that she was very protective of her original recipe, it was with much care that we adapted this fantastic recipe to our “low-carb lifestyle.” We now enjoy the perfect Low Carb Cheesecake!

Heavier New York style cheesecakes generally call for more cream cheese and less sour cream (if at all) than our recipe. But our version has the thickness of New York cheesecake with a more creamy and lighter texture. The combination of vanilla and almond extract really adds an unforgettable taste to the filling.

We usually tell our readers to experiment with our recipes. Try this one, as printed, it really is a perfectly blended dessert!

A “springform” pan is essential for the perfect cheesecake. A “9 inch” pan works best and you should press the crust ingredients firmly into the bottom and about two-thirds up the sides of your pan. There is no need to grease your pan since the crust has butter in its ingredients.

The cream cheese should be softened to room temperature before incorporating into the filling. Add your eggs near the end of your mixing process since they will hold more air the more they are mixed. This is due to their consistency. It can cause cracks on the top of your cheesecake when it cools.


We recommend a stand mixer for the filling. The mix must be well incorporated with no lumps of cream cheese showing. It should be smooth and creamy. We use a “Kitchen Aid.” If you do not own one, it is a great investment for your low-carb kitchen. They last forever.

Wrap the bottom of the springform pan in aluminum foil and place the pan on a baking sheet that contains an inch or two of hot water. Then place the pan in a pre-heated 350 degree oven. This “water bath” will help the mix heat evenly and hopefully limit cracking when the cake cools. It may also be helpful to leave the cheesecake in the oven when done with the door ajar and the temperature off for 30 minutes – this can avoid rapid cooling and cracking.

Our last tip is to place the finished cheesecake in its pan in the refrigerator for at least 4 hours before releasing the spring-form and cutting. It would even be better to refrigerate it over night.

It is great plain or served with a few berries. A dollop of whipped cream adds to the flavor and offers no additional carbs.

Our friends in Germany are used to using “Quark” and likely a dough crust instead of our American cookie crust. Brazilian followers would use condensed milk with ricotta cheese and have a mulberry jam or strawberry jam as a topping. But, if you have ever been to a New York deli and enjoyed a piece of cheesecake, and that fits your definition, then try our “Low Carb Cheesecake.” It is a bit lighter and creamier and, after all, it is the world’s best cheesecake!  Enjoy and let us know what you think.

You can top with a few berries and some whipped cream.