Southwestern Shrimp Bisque is our low carb version of a traditional “caldo de camerón” prepared as a bisque rather than a broth. Of course, our cuisine in the Southwest is heavily influenced by Mexican ingredients and cooking techniques. Our shrimp bisque is no exception. Being a bisque means it is creamy, smooth, and loaded with low-carb high-fat ingredients. The Mexican influence is added with the spices and chopped jalapeño. We love the soup – it is, of course, Tasty Low Carb! 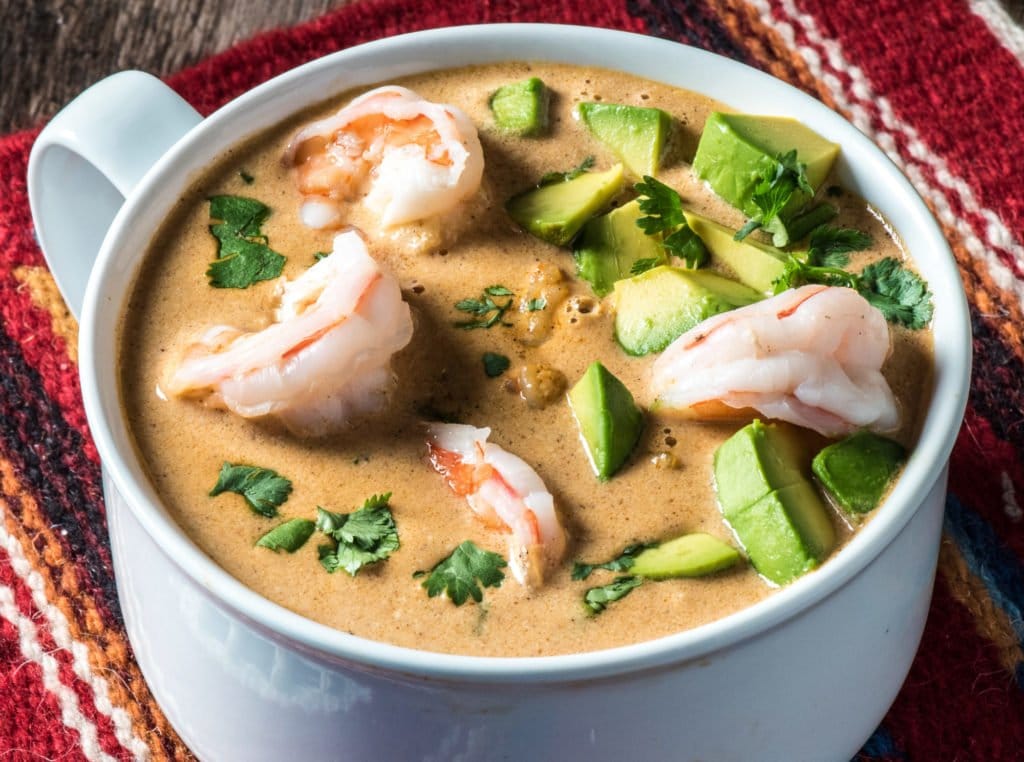 “Caldo de Camerón” is very common in Mexico. But, as with most recipes, each region would add its own take on the recipe with differing ingredients and flavor. Some regions add a corn dough for thickening. Other regions will not use vegetables. But, most often the soup will include fresh shrimp, carrots, corn, potatoes, and a tomato flavored broth. It is also not typically a “bisque.”

Our version is not only a “bisque,” but we also eliminate the potatoes, corn, and carrots. This is essential to reduce the carbs and fit within our low-carb lifestyle.

Shrimp is the main ingredient to this soup. We use fresh and peel and devein them as a first step. We retain the shrimp shells as they are the key to making a delicious shrimp stock. You could use crab meat, or lobster meat instead. You could even make a Southwestern clam bisque from this recipe. The spices would remain the same and the taste would be similar with each choice.

For thickening we use almond flour rather than wheat based flour; this also reduces the carb content. Also, the heavy whipping cream, butter, and even the sour cream will aid in the thickening of the soup. These ingredients are also low in carbs. 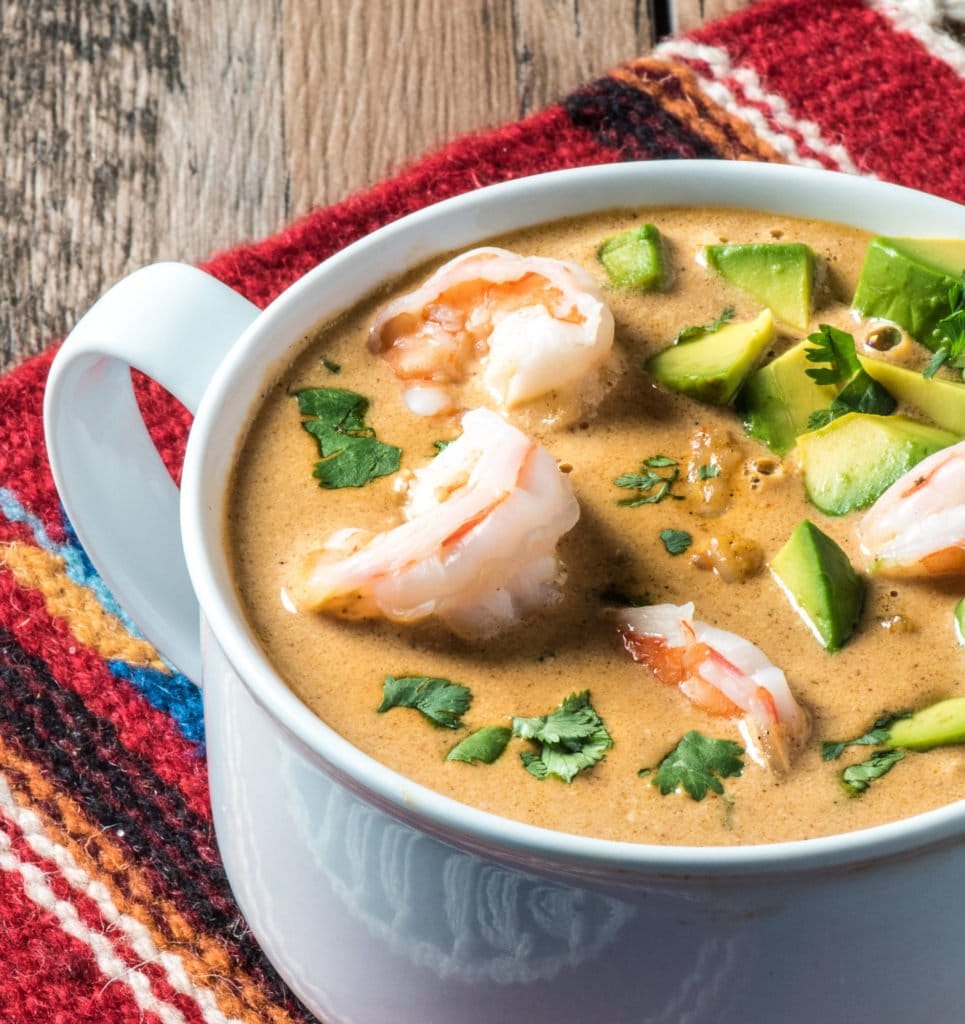 Our Mexican influence is found in the chopped jalapeño, chili powder, cumin, Cholula hot sauce, and corn extract. We also garnish our Southwestern Shrimp Bisque with chopped cilantro and avocado chunks. We use a small amount of tomato sauce for flavoring and color. This is also to display a Mexican flavor. We have used “corn extract” before in our Low Carb Corn Bread and our Low Carb Taco Shells.


We rarely make a soup that does not include a good sherry. For a delicious bisque it is an essential. We have also posted before on the necessity of using a real Spanish sherry – they are simply the best. You can read our discussion about sherry found in our post of Langostinos in Sherry Cream Sauce.

We definitely recommend making homemade shrimp stock. It is easy and adds so much flavor to any soup recipe including shrimp. Simply boil the shrimp shells (and heads if you buy whole shrimp) for about fifteen minutes in salted water. Then strain the stock and you will have a solid stock base for the recipe. You can also substitute a seafood stock or clam chowder for the additional cup of water that is added after the cream is incorporated. This will add an even greater flavor from the sea. 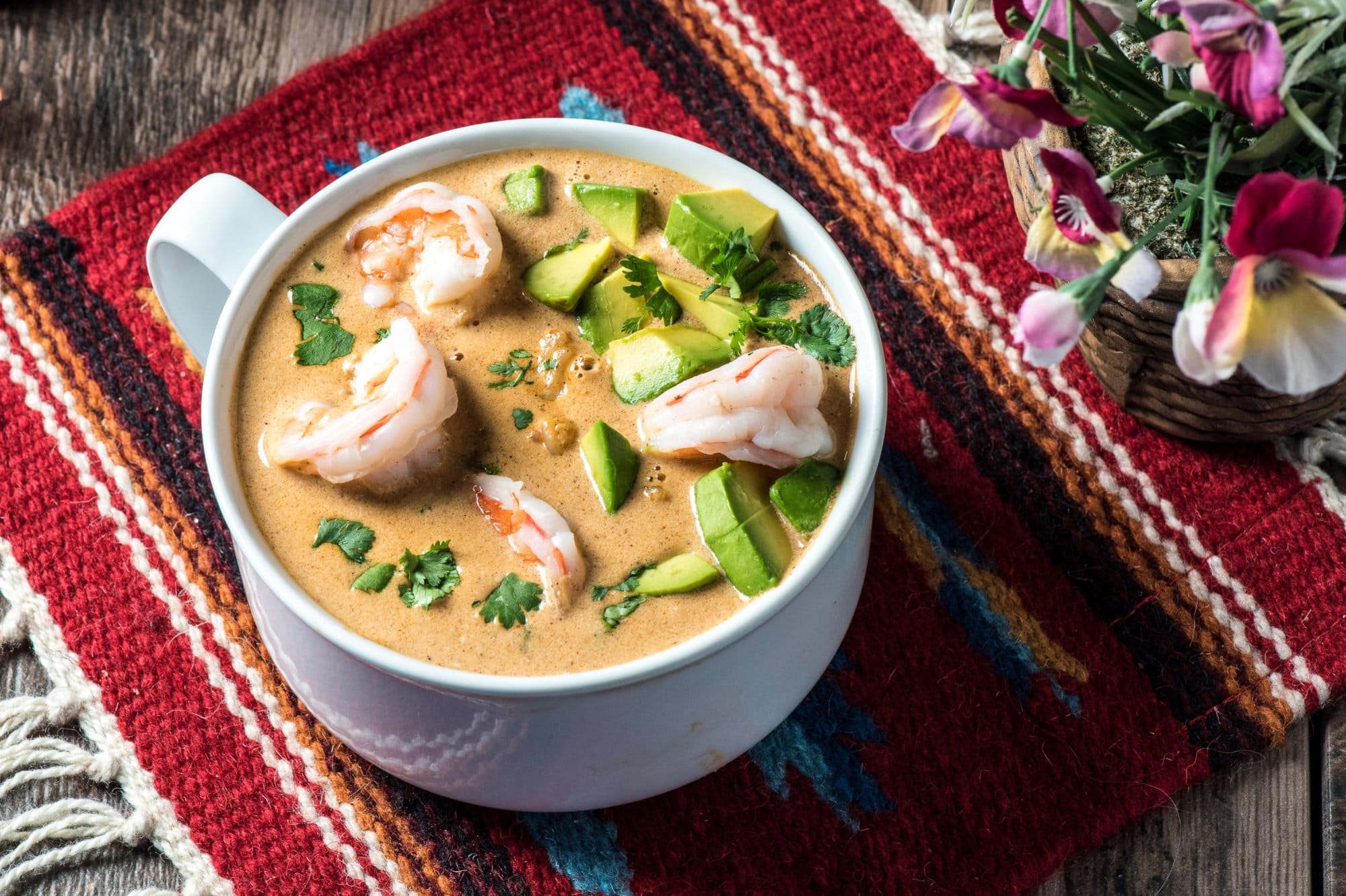 The jalapeño should be very finely diced. We remove the seeds but if you prefer more heat you can leave the seeds in the soup. You can also add more almond flour for a thicker soup. However, the shrimp bisque will thicken as it cools and if you make a larger batch the soup will thicken overnight in the refrigerator. You can always add a little seafood stock when re-heating to thin the soup.

We also strongly urge you not to overcook the shrimp. It should be added for the last few minutes when the consistency is where you want it and the tomato sauce has been incorporated. We also usually add a few previously cooked shrimp (either grilled or poached) as a garnish. Of course the cool avocado and cilantro also add to the presentation and flavor of each spoonful. We like the blend of hot soup with chilled avocado. 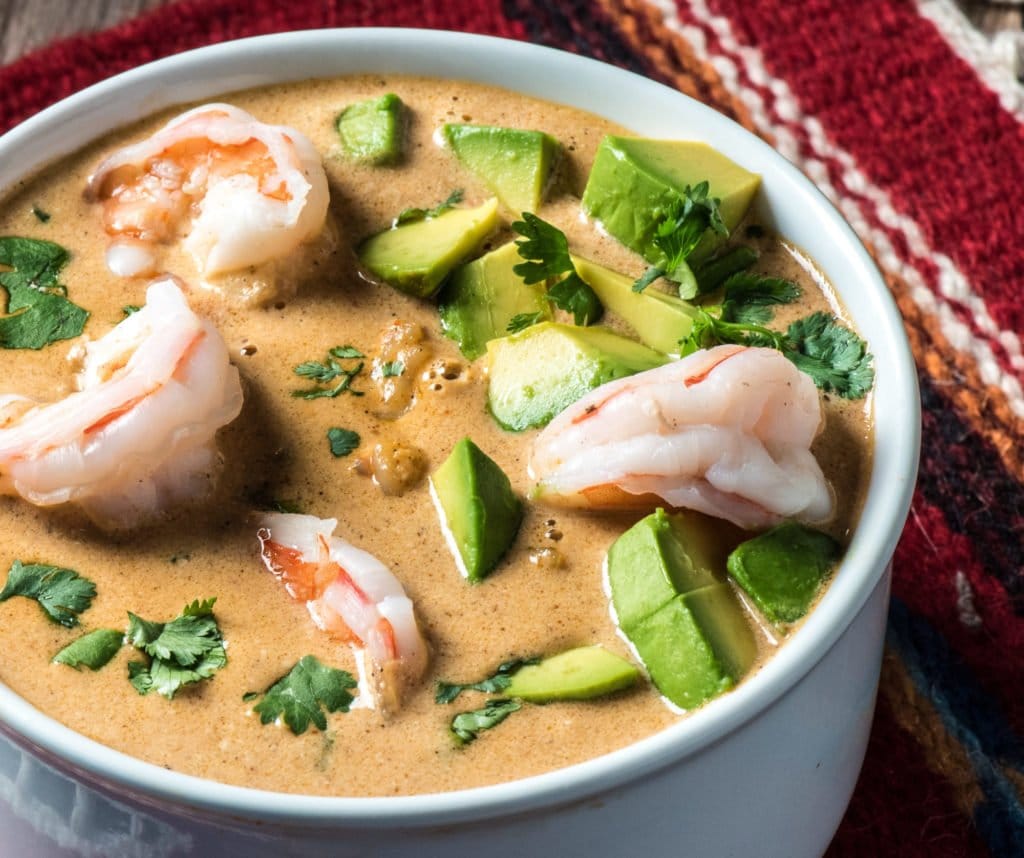 You will definitely get a Southwestern kick with the blend of chili and spice and the shrimp flavor is delicious. This will become a “go to” bisque for friends and family. It is very rich, as they say, a little will be very filling and of course the carbs will be low. Enjoy!

Tasty Low Carb is a participant in Amazon’s affiliate advertising program. Clicking on a product or Amazon ad will re-direct you to Amazon.com. For your purchases, we may receive a small consideration that will help us build and maintain our website.